PROTOCOLS BEFORE & AFTER TRAINING
PROTOCOLS DURING TRAININGPlease refer to our COVID 19 POLICIES AND PROCEDURES page for general facility guidelines.

I began my acrobatic journey in Kazakhstan, where I started training gymnastics at the age of five. In the gym where I trained, we also had an acrobatic program. I enjoyed watching the other kids train acro because they seemed to be having more fun working in a team to build new skills. Inspired, at the age of 9, I joined the acrobatic program and became a flyer in a women's pair. Four years later, our duo won Kazakhstan's national championship and joined the national team, and I was honored with the master of sports title in Kazakhstan. In 1995, we became finalists in the Junior World Sports Acrobatics Championships in Riesa, Germany. In 1994, at the age of 13, our coach built a group of six girls to perform sports acro. We started to perform a pyramid act at the Kazakhstan State Circus and were part of the international circus festival in Wuqiao, China, in 1995. In 1999, I graduated from a four-year program at The Kazakh Republic College of Variety Arts and Circus named after Zh. Elebekov. Our group created an additional jump rope act, and with our pyramid and jump rope acts, we were part of the "The Circus Princess" festival in Sweden. We had performed worldwide in places such as Cirque d'Hiver Bouglione in France, Carre Theater in the Netherlands, and Circus Knie Switzerland. After 11 years of working together, our group decided that it was time to separate. Therefore, in 2006 I began my solo career as an aerialist and a hand balancer. I created an aerial net act, and I was mostly traveling and performing in the USA. In 2009, I was part of the Britney Spears "Circus Tour" in Canada and the US. After that, I married, had kids, and settled down in Las Vegas. There, I performed at Circus Circus Casino and many additional shows and events. In 2016, I decided that it was time to start sharing my knowledge with others. As a coach, I joined the non-profit organization program called "Social Cirkish" and taught kids gymnastics and aerial classes at L'Oracle Circus, Gymnastics, and Fitness Center. In 2017, my husband and I received an offer to perform at Circus Circus Casino in Reno. We were drawn to accept the offer for a few reasons. First, it is a special place for us because we met in Reno while both performing in the Aphelion show at Eldorado Casino. Second, it is such a beautiful place with lots of outdoor activities, making the perfect place to raise our kids. Until March of this year, my husband and I had been performing at Circus Circus Casino. As a next step, I am looking forward to joining the Acro Enso team and sharing my knowledge with our wonderful community. 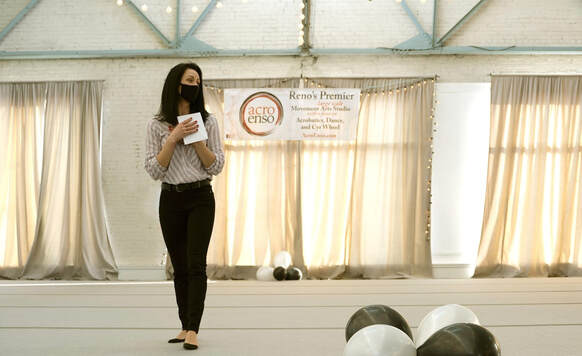